How Close Are WE? 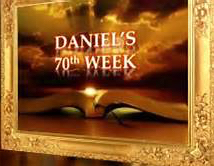 I heard President Trump deliver a speech declaring that Jerusalem was the capital of the Nation of Israel.  Also on Fox News that peace talks would start soon, while other foreign leaders were condemning President Trump for this action.  I think the band is warming up for Daniel’s 70 week to begin! 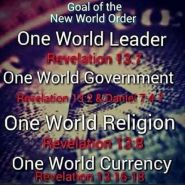 The Anti-Christ is going to establish a one world government.  He will set this new world order according to the the chart at the right.  All four of these items are ready to be put in place.  When this new leader shows up he will allow Israel to worship in a newly built Temple for 3.5 years and then break his agreement and demand that he is to be worshipped.  Assigning a mark for his worshippers to wear and those who do not worship him are reserved as the sacrifice, having their heads cut off (Rev. 20: 4)

The Scripture for tracing this teaching is Daniel 7:8-11, 19-26, 9:24-27, 11:36-45, Revelation 13:1-8. 17:1-13, 20:4.   These verses show how the Anti-Christ will rule over a ten nation confederacy that will represent a revived Roman empire.  Once the treaty is signed between the Anti-Christ and Israel, allowing Israel toworship  God The Father.  They will begin to do this in a newly built temple for three and a half years, when the Anti-Christ will put an end to this and demand that all worship him.

John Walvoord summed an article he wrote about the Anti-Christ and the scripture relating topic with this statement.  “The appropriateness of this prophecy to our present day is another indication that the church may be ending its earthly course and that end-time prophecy is about to be fulfilled”.     This article was taken from the Theological Journal Library CD and posted with permission of Galaxie Software.

This site uses Akismet to reduce spam. Learn how your comment data is processed.