The End Times are here, not full-blown as of yet, but then again, Christians have had a reprieve from the Lord in the election of Present Donald Trump!  Things get full0blown 3.5 years once the AntiChrist things get started.

What I mean by that is, if Trump was not the president. our country was inline to become a third class country, setting the time  for when the Antichrist would step in and create his one world government!  I know that sounds alarmist, but if you are watching the news these days and seeing all the problems this president is having and know anything about the “Globalist Agenda”, You know through the Obama years we were being set up for that very thing!

I bring this up now so you can be aware of how close the catching away of the church is, thats right the Rapture!  The Nation of Israel sees it like this in the their Holy Feast Days, Leviticus 23, especially the fall feasts.   The first fall feast being the Feast of Trumpets!

The Feast of Trumpets was a blowing of trumpets to announce to God’s people of a time of judgement and Christ’s coming, ” (Joel 2:1; see also Zephaniah 1:14,16).  Now while these three feasts all are in the same month of Tishri the timing or fullment of their events may happen in different years.  Daniel’s prophecy in Dan 9, 24-27, noting the time of Jacobs trouble, Jeremiah 30, that there may be years between the three fall Feasts, even though they are celebrated every year at the same time each year.  There are 7 years between Christ’s actual coming and a time of judgement by the anti-christ, Time of Jacob’s Trouble, Jer. 30, Dan 9:24-27. (See blogs on The Feats of the Lord Parts 1 & 2 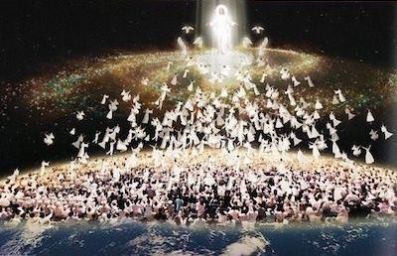 Israel will face judgement from the Lord for the rejection of their Messiah.  The Christian’s judgement is located at the Judgement Seat of Christ, I Cor. 3:11-15. Another topic fo another blog.

The time leading up to the rapture is the subject at hand along with those events that set it in place.   The question to ask is, “Where is the USA in all this?”  or “What kind of political situation does the USA face for this to happen?”   Obama was getting America in that position with his policies while in office.  You can read the “Globalist Agenda” at www.globalistagenda.org/.  Here a few exerts from there.

The elite have long viewed a rising population as a threat to their dominance. They realized that eventually a large number of people will inevitably overthrow and remove them from power. They are particularly concerned with the middle class whose intelligence and capacity to organize makes them the biggest threat. Consequently, the elite plan to destroy the middle class and make all the of public equally poor and thus incapable of rebelling. As written on the Georgia Guidestones, they want a global population of just 500 million. This means 6+ billion people must die over the coming century.

Dumbing Down of the Population

A well informed and educated population is the last thing they want as they prepare to bring the people through the greatest period of change in human history. To accomplish this they have systematically reduced the quality of education and have chemically reduced the IQ of the population by adding fluoride to the water and mercury to the vaccines.

What is truly remarkable about this whole thing is that the Bible predicted this several thousand years ago.  Read about the four horse men of Revelation 6, when Christ opens the 7 sealed book.    Rev.  6:7-8, “And when he had opened the fourth seal, I heard the voice of the fourth beast say, Come and see. And I looked, and behold a pale horse: and his name that sat on him was Death, and Hell followed with him. And power was given unto them over the fourth part of the earth, to kill with sword, and with hunger, and with death, and with the beasts of the earth.”  So a fourth part of the Earth’s population, 7.6 Billion, would be 1.9 Billion people die in that event.

As stated in the section on beliefs, the elite are obsessed with over population and have written about it for centuries. Consequently, as written on the Georgia Guidestones, they want a global population of just 500 million. This means 6 billion people must die over the coming century starting in 2010. http://www.globalistagenda.org/.

The Globalist Agenda was delayed in the election of Donald Trump and why we have all the trouble with our politicians these days. Presidential candidate and highly successful businessman Donald Trump said it best; we should be concentrating on Americanism, not globalism.”  The “Globalist Agenda”.

The Atlantic Council, a think-tank, wrote a 57-page report, “Envisioning 2030: U.S. Leadership in a Post-Western World,” to “help prepare the Obama Administration and its global partners for unprecedented change.”

The report predicts a future of “vast economic and political volatility, environmental catastrophe, and conflicting, inward-looking nationalisms that would be unlike any period that the United States has seen before.”  “President Obama will be setting the tone and direction for U.S. policy in a post-Western world.” (Atlantic Council, Executive Summary, p. 5)

President Obama was very much an agent to bring in the “Globalist Agenda”, as you can see by what he has said,    “Instead of having a set of policies that are equipping people for the globalization of the economy, we have policies that are accelerating the most destructive trends of the global economy.” , “My second piece of advice is to stay global. As the world continues to change and we become more connected to each other, globalization will bring both benefits and disruptions to our lives. But either way, it’s here, and it’s not going away.” Barack Obama”.

The agenda has been set, “This is a succinct presentation of the madness contained in the various plans to transform the planet: Agenda 21, Agenda 2030 and now Vision 2050. This is Technocracy at its peak, and the only opportunity we will have to stop it is before it imposes a complete scientific dictatorship.⁃ TN Editor.”

Remember,  we are talking about the “Rapture and the AntiChrist” coming to power.  In doing so, according to Gavin Finley MD – endtimepilgrim.org and his work on,  “METONIC CYCLES AND THE 70TH WEEK OF DANIEL”, gives us various dates when the rapture could happen,

Our Great Lord and Savior Jesus is a sovereign God and his plans will not be upset by man.  His plan is set and no matter what the “Globalist” may intend to happen will not happen, but instead use their plan to his benefit on his terms and not before.  That’s why I said we have had a reprieve from the Lord in the election of Present Donald Trump!

One thought on “The End Times, Cont’d”

This site uses Akismet to reduce spam. Learn how your comment data is processed.